Currency symbols around the world

According to the International Organization for Standardization (ISO), there are almost 300 currencies circulating the world, and every world currency has its own distinct codes, set by ISO, and currency symbol. ISO is the same organisation responsible for the creation of the International; Bank Account Number (IBAN), and we have previously written about what an IBAN is and how to find it. IBAN was introduced as a simple solution to translate bank account details into a machine-readable alphanumeric format to better facilitate international money transfers. Similarly, currency codes and symbols create a unified language to connect the various currencies around the world in a universally understandable way.

ISO publishes and maintains the “ISO 4217” code list, a list with both alphabetic and numeric codes to represent currencies around the world. It’s used to establish internationally recognized codes and reduce confusion and errors when dealing with different currencies.

Each currency has a three-letter alphabetic code and corresponding three-digit numeric code. You may see the alphabetic code when you’re comparing the exchange rates for different currencies. For example, below you’ll see EUR/GBP in a quote using CurrencyFair’s Exchange Rate Calculator for the euro against the British pound. EUR is the three-letter ISO currency code for the euro, and GBP is the code for the British pound, created by ISO based on the first letters of “Great Britain” and “pound”. 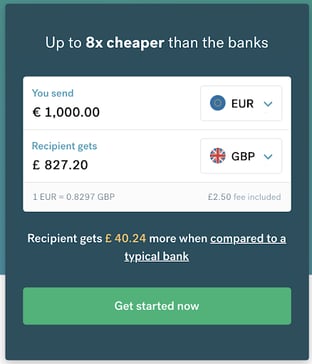 ISO also maintains numeric codes for currencies, but you’re less likely to run into these in your day-to-day currency needs. According to ISO, numeric currency codes are used in countries that do not use Latin scripts and for automated systems, such as the computer programmes used internally by banks and fintech companies.

How do I use different currency symbols around the world?

When you use a currency symbol to denote an amount of money, the position of the symbol varies based on the language in which it appears. Currency symbols are generally placed either before or after the numerical digits, although in some countries they may be placed in the middle of the figure instead of a decimal point.

In Cape Verde, the $ symbol is typically used to separate decimals; for example, 20$00 indicates 20 escudos. Its official currency is the Cape Verde escudo (CVE).

In cases where the same currency symbol is used to represent multiple currencies, as in the case with the dollar symbol, the symbol may include a country prefix, such as Mex$ for Mexican peso, or US$ for U.S. dollar.

Currency symbols around the world

The following is a list of the currencies of different countries with symbols and currency codes. This isn’t a fully exhaustive list, as with the introduction of new global currencies and cryptocurrencies there are additions to be made all the time. For example, the cryptocurrency Bitcoin, invented in 2008, is represented by the ​​₿ symbol.

How affiliate marketing can supercharge your business