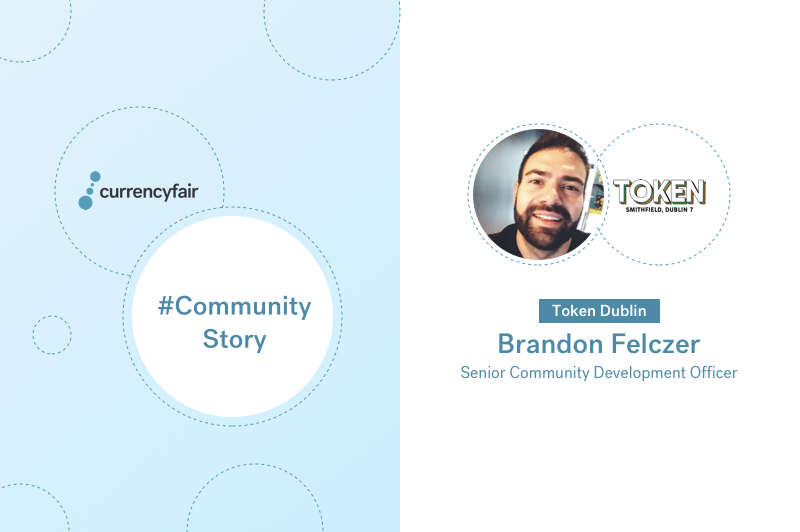 Brandon Felczer discusses how Token has levelled up Dublin dining.

The TV show Stranger Things has a special gift: it artfully balances our love of nostalgia and all things retro with a true connection to its fans in a way that no other show has managed to do.

In 2017, a new venue managed to achieve the same balance within the Dublin restaurant and bar scene.

Token is an arcade bar that opened last June in Dublin city centre — it has successfully invaded Smithfield, taking aim at what a conventional night out in Dublin looks like. Stocked with retro arcade and pinball machines, it is also a licensed bar and award-winning restaurant. CurrencyFair spoke to one of its owners and Senior Community Development Officer Brandon Felczer about the journey he and Founder Nick DiMaio went on to open this alternative eatertainment venue in Ireland.

Brandon, you are originally from Southern California - what brought you to Dublin?

In January 2016, I was on a work trip that took me around the world, and one of the stops was here in Dublin. During my 5 days here, I fell in love with the people, culture, and land — something called me, and I decided I would make it my goal to move here. I had planned on moving to Ireland in June 2016 but stayed in the States for my grandmother as she had been going through a pretty tough time - she’s much better now! That said, I ended up finally deciding to move here the night of the election of President Trump into office as it just seemed like the best time to do so. I moved to Ireland from SoCal in December 2016. I had no idea what I would be doing for work, living arrangements, or anything else, but I knew I would make it work — I was too determined for it not to. And a lot has happened to me in the space of just one year in Ireland. It’s been amazing. Christmas 2017 was actually my first Christmas away from my family in the US, but my friends here made sure my first Irish Christmas was amazing.

What were your highlights of 2017?

It was really a year of opportunities and taking risks. I enrolled in a MBA programme, began hosting and producing a radio show on 103.2FM, joined the Dublin Gay Men’s Chorus, and am now part-owner of Token a retro arcade bar in Smithfield with Nick DiMaio. I also lost 6 stone over the year — 2017 was truly about becoming the happiest (and healthiest) person I’ve ever been, and I honestly did and still am.

Did you see a gap in the Irish market for a venue like Token?

In my previous roles I managed the communities for key studios in the US video gaming industry. It was a world I was experienced in and really passionate about. After my first two weeks in Ireland, I was curious if a retro arcade bar as they are known in the States, existed here. I googled the term and found a 2015 article relating to the planned opening of a retro arcade bar by Nick. With more research I found out he also owned The R.A.G.E - a well-known Dublin store specialising in vintage games and vinyl records. I had always wanted to open a retro arcade bar so I synced up with Nick to chat as it made sense to me that we should work together rather than compete. It would be the perfect combination of his knowledge of retro arcade machines and running a business in Dublin and my background in community management and the video gaming industry that would be the foundation for a great future of working together.

What does your role in Token involve?

As the Senior Community Development officer for Token, I am focused on developing a community atmosphere and deepen the relationships that exist between our community members and us - we don’t have customers, we have fans and we couldn’t ask for a more supportive, amazing group. We host various community events, including board game nights, video game tournaments, and much more. We also and have an award-winning dining experience. At the November 2017 Food Awards Ireland, we won top prize for Restaurant of the Year in Dublin, something that we couldn’t have done without the amazing support of our community, as well as our incredibly talented team of chefs who are lead by Head Chef Lil Shane.

What obstacles did you encounter in the journey to open Token?

The journey to open Token has had its challenges, but we were too determined not to make - what we felt Dublin needed and would enjoy - a reality.

It did take time to source all the machines, and many came from all over the world — we wanted to bring the best games to our community. Then we had to refit and repair many of them to get them in a working state again (shout out to Dr. Conor, our mastercraft games technician). Even acquiring a license to serve alcohol in the building and have it applied to the premises took time as the building we are in was originally zoned as a retail space. Then the build itself took time to convert what used to be a carpark into a functioning lounge and kitchen prep space.

"All told, you need a lot of patience and focus on what you need to achieve; but, seeing everything in place now and the community enjoying themselves is so humbling."

Where have you seen the power of a community really having an impact?

The ground floor of the space was already accessible to everyone, but the lift needed a complete renovation if we were to ensure all members of the public, including those with mobility difficulties, could use it. The basement level where we would have an event space, pinball parlour, and craft brew bar was currently only accessible via a set of stairs.

The community supporting us really came together when we ran a Kickstarter campaign to refurbish our lift. Our goal was to offer discounted meals and other merch ahead of opening in exchange for support so we could get the lift ready to coincide with the grand opening. It was very important to us to be able to provide the full Token experience to all from the moment we opened our doors.

How did you find out about CurrencyFair?

Really simply: my business partner told me about it. All his American friends in Ireland were already using the service and raved about it. Since I started using CurrencyFair, I haven’t looked back and couldn’t do my business without it.

As someone experienced in delivering a positive community experience, how did CurrencyFair compare?

It was just seamless from beginning to end.

"I couldn’t imagine not using CurrencyFair now. It has become an integral part of my finances - I use it on a weekly and monthly basis."

It is very user-friendly, the user flow is easy to understand and there are emails to inform me every step of the way so I never have to worry about anything.

What does CurrencyFair help you do?

CurrencyFair helps me with home responsibilities. I have to pay for storage in the US and other ongoing payments, and it means I am saving when I send money to the US by using CurrencyFair.

Personally, I am focused on finishing my MBA in June 2018 with the submission of my dissertation; it is titled: “Exploring the impact that engaging content and open dialogue over social media makes on Irish restaurants' brand loyalty” - something I see in action every day in my job, so it’s going to be really interesting to explore this further.

And as for Token, we are really focused on working alongside our community to take the Token experience to the next level by continuing to push the boundaries of dining and entertainment in Ireland.

In the interest of full disclosure, CurrencyFair attended a team event in Token in early December 2017. In communication with the social committee after the event, Brandon mentioned that he used our service and we then contacted him for this interview. Brandon has not received a gratuity in return for this interview.

The best way to send money between Australia and the UK