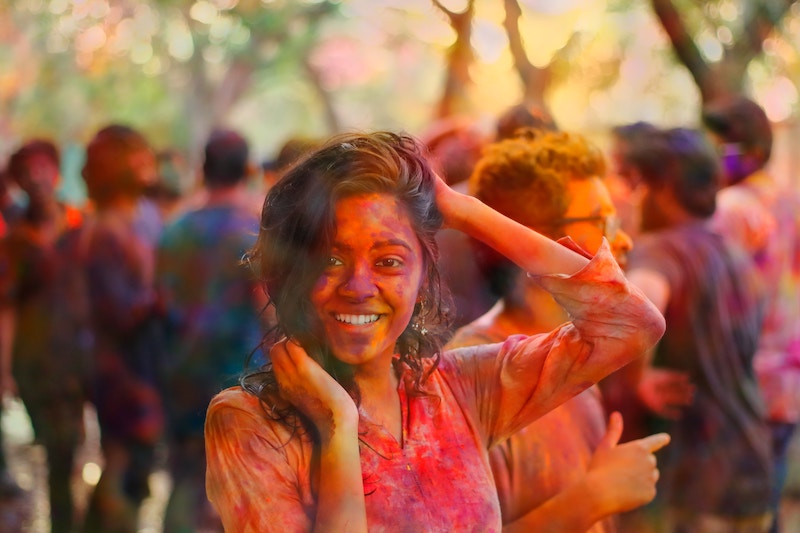 Different cultures come together in the UK when celebrating the many festivals of India. Under greyer skies, the vibrancy and beauty of Indian festivals burst into the streets and temples of London, as well as across the country. Looking to celebrate Diwali, Holi or any other festivals of India this year? You may not need to look further than your own backyard.


Holi – ‘The festival of love’

Holi is celebrated in almost every part of India as a time for letting go and reveling in positivity.

One of the most popular legends behind the festival comes from a story about Krishna, the Hindu deity. Ashamed of his dark skin, young Krishna was worried that Radha, his love, would not accept him. Krishna’s mother suggested colouring Radha’s face in a shade he wanted, which he did playfully, introducing the colourful festival of Holi. Though origin stories vary, the spirit of Holi remains the same – it’s about bringing people together. Everybody gets covered in the coloured gulal, regardless of age or social status, as a celebration of Radha and Krishna’s love.

Lasting for a day and a night, this year the celebrations fell on the 20th to the 21st of March – the first full moon between the end of February and the middle of March. The first night is called Holika Dahan where religious rituals are performed. These include prayers that any evils within you are destroyed and bonfires are lit to celebrate the victory of good over evil.

The following day is known as Holi, or Rangwali Holi. This is the day when the streets explode with coloured powders, with water balloons and water guns going off in the multi-coloured clouds so that everybody gets covered.

The Holi Festival comes to London with the Festival of Colours – combining the colourful Holi with a festival feel, music and a main stage. The Holi One festival in Wembley also boasts a similar program, with DJs, dance music and a big countdown to the colours being thrown in the air. Holi events are also celebrated in Manchester and many other cities.

Diwali – ‘The festival of lights’

The lights that people fill their premises with over Diwali are a symbol of the victory of knowledge over ignorance, of good over evil. As a festival, it embraces the idea of oneness within diversity, being important to many Hindus, Sikhs, Jains and Buddhists. This year the festivities fall on Sunday 27th October.

Save on transfers to India every day with CurrencyFair. Send money at rates up to eight times cheaper than a typical bank with free Rupee transfers for a limited time only.

There are actually five days of Diwali, each with their own significance and customs. Day one is the day of fortune (Dhanteras) when Lakshmi the Goddess of Fortune is worshipped. Day two, the day of knowledge (Naraka Chaturdasi), is related to the traditional story of Lord Krishna slaying the demon Narakasura. To mark this day, coloured Rangoli patterns are made out of rice. Diwali itself is day three, marked by fireworks, and is the last day of the Hindu calendar in many regions of India. This is the day Lord Rama won back his wife from the demon Ravana, and his people lit lamps, so that he could find his way home in the dark. Today people place light in their windows to honour his triumph over evil and his homecoming. Day four (Annakut) is the new year, when food is piled up in temples honouring Krishna, and on day five (Bhai Duj), the day of sibling love, brothers commonly give gifts to their sisters.

Sending money home to family? Try our free currency calculator to see how much you can save with CurrencyFair.

If you’re looking to celebrate Diwali 2019 in the UK, some of the best and biggest celebrations happen in Leicester, with a cultural event program that starts at the Golden Mile and radiates out across the city. You’ll also find Diwali 2019 celebrations in the heart of London – Trafalgar Square, specifically – where tens of thousands of people flock to take part in the celebrations.

There’s also an immersive family festival experience to be had at the Electric Woods on the Isle of Wight. The forest is illuminated with the colours of India to celebrate the day of light, and workshops around the other four days of Diwali run throughout your stay.

Other Indian festivals celebrated in London and the UK

Another one of the biggest festivals celebrated passionately in the UK is Janmashtami, to celebrate the birth of Krishna. It falls on the 23rd August 2019. Krishna is central to the Hindu pantheon, as a warrior, hero, philosopher and teacher, as well as the eighth avatar of Vishnu. In temples, Krishna likenesses are bathed or sometimes put into cradles, and some devotees fast until midnight on this day, followed by a feast in his honour. As Krishna was believed to be born at midnight, this is when the festivities kick off. One place to visit in London for Janmashtami is the Radha-Krishna temple at ISKCON London, or Bhaketivedanta Manor in Herefordshire.

Eid al-Fitr marks the end of Ramadan, and is celebrated across the UK by Muslim and non-Muslim communities alike. This year, the festivities will be from the 4th until the evening of 5th June 2019. It’s a time for communal prayer, gift exchanging, enjoying time with friends and family and dining on delicious food.

The nine-day Hindu festival of Navaratri (nine nights) symbolises the triumph of good over evil. People celebrate with traditional music and dancing, as well as the Hindu ceremony of the aarti plate, where singing accompanies a lit candle offered to welcome the gods on a lavishly decorated metal plate. In 2019 in the UK, Navaratri will be on the 29th of September until the 8th October.

Planning on sending money home to celebrate Diwali or Holi? Find out how easy and much customers can save on money transfers to India with CurrencyFair.

CurrencyFair Life Abroad is a series dedicated to helping our members navigate the wide world away from home. Whether it’s calculating the cost of living in your adoptive city, navigating a path to citizenship or staying connected with communities from home, CurrencyFair shares member expertise across its network to help create a world of fairer financial services for all.