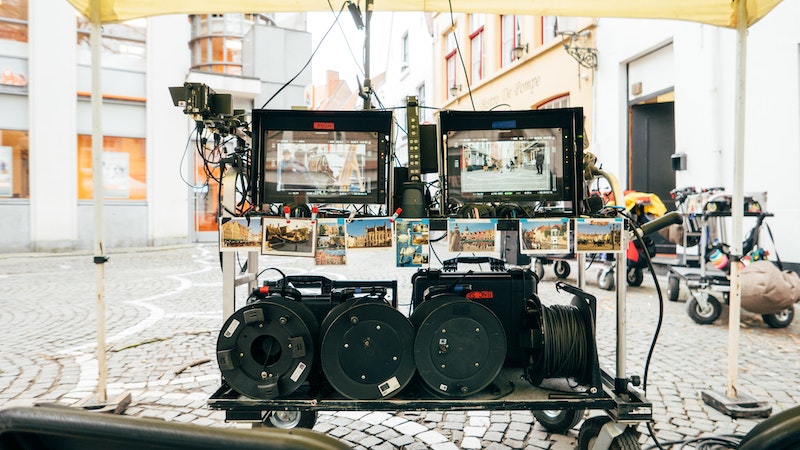 Just like the script of many memorable movies, 2020 revealed it’s biggest plot twist in the opening scenes of the year. The arrival and spread of Covid-19 transformed much of the creative industries landscape overnight as production for TV and film was closed down all over the world.

Sound stages fell silent, crew and cast were sent home from overseas filming locations and staff in animation and digital studios were asked to work from home. With so much ongoing uncertainty around Covid-19 and restrictions still in place around the world, many creative studios have permanently re-imagined the technology used for production.

Companies in film production around the world have expedited innovation that they were probably still work-shopping. The tactics and measures to deliver creatively despite Covid-19, has led to some agile and smart innovation in the film and TV industry.

Let’s look at some of the innovations in technology and production Covid-19 has fast-forwarded for the film and TV industry.

Innovations in technology for film and TV

Prior to Covid-19 there has been a steady increase in, and demand for, films that blend live-action and computer. Now that film sets are being remotely run from anywhere in the world, studios can build on this hybrid of virtual and physical production, reducing costs normally needed to manage sets on location in new countries.

The gaming industry has been mastering graphics-rich image rendering for decades. Video game giants are now using their gaming engines to revolutionise film and TV, reduce logistical costs and improve production time by digitally recreating real-life Covid-safe sets (hopefully meaning less incidents like the recent report of Tom Cruise’s behaviour on the Mission:Impossible set). Gaming powerhouses can also see the appetite for streaming and the increase in content consumed on Netflix, Apple TV+ and Amazon Prime. Larger video game companies are producing longer form, non-gaming content for an already loyal audience who might want to see more of their favourite worlds explored and characters fully realised.

Technology that was previously a support to physical filming is now central for example a director can plan the shots of a film using HoloLens technology - a type of mixed reality helmet developed by Microsoft - to position and mark each move of the camera lens and each shot captured.

WarnerMedia's new streaming service HBO Max is coming to Europe and Latin America in late 2021. After almost a year of algorithm-generated recommendations, audiences are tiring of machine learning tools advising them on what to watch next. WarnerMedia is positioning HBO Max as a “human-first platform” with human curation from celebrities and taste-makers their audiences admire and recognise - even friend recommendations are on their product roadmap.

Innovations in production for film and TV

Many see virtual production as the next natural evolution in film-making. Like the transition from shooting on film to digital, virtual production is the next big leap as it breaks down typical production silos. The final creative steps around colour or editing are brought closer to the filming process. Directors can use Virtual Reality (VR) headsets to position actors on a motion capture stage and to view them moving against the background in real-time, rather than waiting to review and reshoot in post-production.

Companies in the creative industries are outsourcing more of their production process.

Find out about the opportunities and pitfalls of outsourcing on our blog.

In a pre-Covid world, the pre-visualisation of a film’s world was key to planning the shooting order, locations and timeline. Now using digital technology and virtual production, post-visualisation processes actually start well in advance of the shoot and can run in parallel to production as actors perform in digital environments from anywhere in the world.

LED walls and video walls can now render content for playback not only in real-time, but synchronised with the camera’s viewpoint. Filmmakers can stage scenes with greater realism than with a green screen and are empowered with quicker decision making on set. Normally used to create locations in outer-space or completely fictional worlds, now 20-foot high, 75-foot wide and 270-degree semicircles of LED video walls or LED stages are being used for filming the most standard scenes like those set in vehicles or productions that require global filming locations.

The recent announcement by WarnerMedia of the plan to launch its 2021 slate on its streaming service HBO Max on the same date as the theatrical release, was game-changing. Pre-Covid theatrical releases were key to the success and box-office earnings of any movie released. It meant studios enjoyed follow-up success on streaming services and a longer life cycle for a movie. Now studios are trying to hedge their bets. WarnerMedia has committed to their new streaming distribution model for one year. It will mean any movie they release will have a one-month streaming life as well as a simultaneous and most likely longer theatrical release.

The film and TV industry is known for creativity and for being at the fore-front of innovation in the technology used to deliver stories to audiences.  Measures to make sets Covid-safe and to merge the human part of movie-making with these fast-forwarded innovations in technology will lead to more immersive cinematic experiences for movie-fans around the world.

How tech companies are preparing for a distributed workforce after Brexit

Covid-19 government supports for the film and TV industry