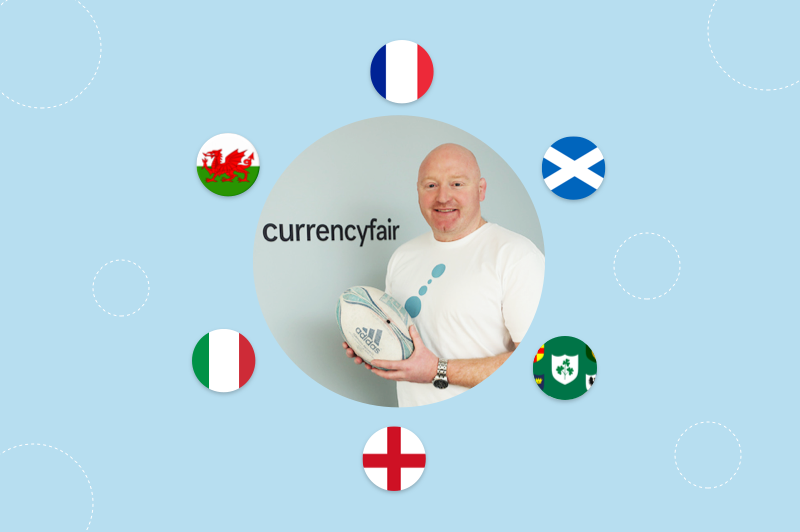 This week our brand ambassador, Bernard Jackman, once again popped into CurrencyFair HQ to talk rugby. As a well respected player, coach and pundit, the former Irish international, now coaching in Wales, offered his unique perspective on this weekend's Six Nations clash between Ireland and Wales.

After correctly predicting wins for both Ireland and Wales in the opening round of games, we were eager to hear Bernard’s thoughts on this week’s action.

Both teams will view this fixture as a crunch game that will set the tone for their remainder of their Six Nations campaigns. After their narrow defeat to England at Twickenham, Wales need a victory in Dublin to keep their championship hopes alive, while Ireland will hope to maintain their Grand Slam hopes with another victory on home soil.

But before getting into match predictions, Bernard shared a more in depth analysis of rugby players and what a player needs to make a position their own.

With Robbie Henshaw ruled out for the remainder of the tournament with a shoulder injury, Chris Farrell is expected to come into the Ireland team at outside centre. Having coached Farrell during his time at Grenoble, Bernard is confident the young Munster centre has all the attributes to step up to the occasion on his Six Nations debut.

"Chris is a player with great physicality, very strong. He’s a smart defender with a really good passing range, and a great communicator."

Having started his career playing both inside and outside centre, it was at Grenoble that he began to develop into a top-class outside centre. "We always saw him as a 13 when we we looked at his attributes - he makes good decisions and reads the game well."

It’s these non-physical attributes that Bernard believes will help Farrell make the step up from a Pro 14 number 13 to international level. "It’s basically having the ability to pick the right call. Some of the best defenders never have to tackle - they just shape what the attack sees and get the threat closed off without having to commit."

Does he have any fears about Farrell’s temperament on this big occasion? "No, none at all. He has a great temperament, and I don’t think this will phase him."

Will the Irish team changes impact the Welsh team strategy?

Bernard doesn’t believe there will be a big difference in the Welsh strategy: "Wales will look at how Andy Farrell (Irish Defence coach) prepares his teams to defend off set pieces mainly and in general play."

With Chris Farrell coming in, Bernard knows that when playing for the Irish team,

"you are expected to come in and defend the system,"

so there is a certain element of predictability in what can be expected of Farrell this weekend.

What can we expect from the Welsh attack?

For Bernard, Wales have played really good rugby over the last 10 years despite accusations of playing "Warrenball": "They have had a generation of strong athletic players and have used them."

In 2017, the Welsh style of attack was starting to evolve. When Warren Gatland returned from the Lions Tour in New Zealand, he told Bernard of his plans to play with more width and with two playmakers. This was evident in last November’s international test matches, including their win over South Africa.

Looking to the Welsh team, even missing a number of key players like Rhys Webb, Dan Biggar, Jonathan Davies and Leigh Halfpenny at Twickenham, "their attack was dangerous and they created opportunities against England."

"Wales asked a lot of questions of England’s defence, which is statistically probably the best defence of the last two years [in the Six Nations]. If you are able to test that, it means you have something exciting - that will threaten any team."

How will the scrums compare?

Bernard sees a clear distinction between each team’s approach to scrummaging;

"England’s scrum philosophy is: can you dominate up front, can you win penalties, can you put the squeeze on teams?"

Whereas the Irish team under head coach Joe Schmidt;

"like to play away from the scrum. The scrum for Ireland is a great opportunity to set up a backline attack.”

Irish scrum coach Greg Feek’s philosophy is, "...about stability and Ireland plays off more scrums than any other team."

After seeing the Welsh team in action against England, Bernard sees Wales being;

"more aggressive as to what they want to get out of the scrum. Wales really went after England [in the last match]."

Who will win this weekend’s match?

As for the result of this Saturday’s clash, Bernard anticipates a very close, tight encounter. It will boil down to, "who makes the least amount of mistakes. I think it will be a very attritional game - for both teams it will be very percentage based."

With both sides having very low penalty count against them,

"this game will be unbelievably tight. One individual error from either side could cost the game. It could come down to one penalty and whether that is kicked or not".

What about Ireland and England’s Grand Slam hopes?

Does he expect Ireland to go on and claim a Grand Slam? In his pre-tournament preview, Bernard didn’t expect any team to win the Grand Slam, and his views haven’t changed:

"No, I can’t see a Grand Slam. I can see Wales beating Ireland, and Ireland beating England."

We will have to wait and see if Bernard gets it right once more, when Ireland faces Wales this Saturday in the Aviva and England next month in Twickenham.

Save money on international payments with CurrencyFair.

The best way to send money between the UK and Italy

The best way to send money between Australia and the USA