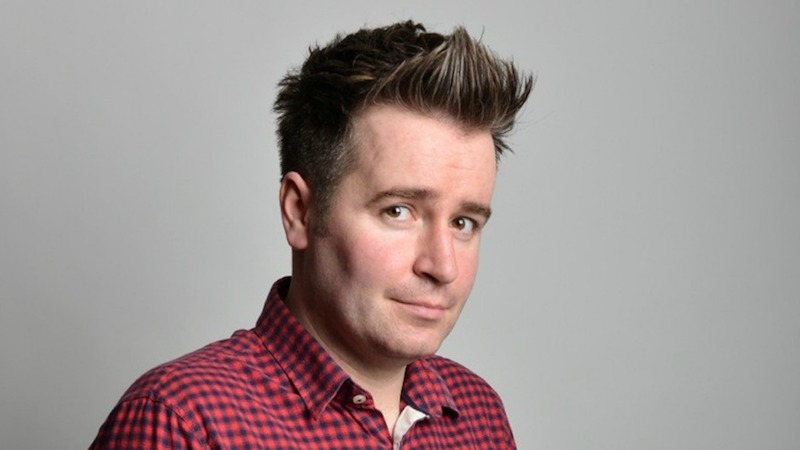 CurrencyFair, sponsor of An Irishman Abroad sat down with host Jarlath Regan as he prepares for his 300th live episode as part of the Underbelly Festival in London next month. Regan discusses the pull of home, the secret to his podcast’s success and what’s on the horizon.

The title of Regan’s website reads: the comedian, the podcaster, the baker, the greeting card maker. Many hats for one man but in truth, all are worn well by him. Since moving to London on St.Patrick's Day 2013, Regan has expanded his audience globally and now finds himself working three full-time jobs, as stand-up comedian and podcast host and family man.


But how did the story of his podcast begin? One day after moving to London, Regan lost his notebook with 18 months of comedic musings in it. He made a public plea for help in Twitter. A retweet by Graham Linehan, creator of the iconic sitcom Father Ted, led to an Irish diaspora call to arms, the recovery of the notebook and the opportunity to interview Linehan for the podcast he’d been mulling. After witnessing the strength and sense of community in the Irish expat network first hand, Regan was inspired to continue these interviews. And the rest, as they say, was history.


The weekly delivery of a podcast is a promise Regan keeps - come stormy hail, soft rain or hazy shine. While all types of “big life moments” happen around him, he releases his latest episode to the community of listeners eagerly waiting on it.  Which, according to Regan, is the secret to the podcast’s success. “In an ever-changing world, for the listeners the podcast is the one constant,” he reveals.


Now through his network of podcasts Regan can give more time to topics that are top of his mind and most importantly, top of his listener’s minds. Having “planted the Irish flag” in the podcasting market with his first podcast, he is confident that the uniqueness of people is what will allow the medium of podcasting to thrive even if the market is becoming crowded. “Podcasting has gone from being a type of pirate-radio ‘gonzo’ style of broadcasting to having the Goliath media companies like the BBC and the Guardian growing their listenership figures and buying up podcast talent. People are gravitating towards the big names the already know and trust,” he said.


However, according to Regan, the more niche interests are catered to, the better the medium will be. “There is space for everyone but none of us are the same, that is why the little corner of the internet I created works,” he said.


Now with a listenership of over one million and the creation of spinoffs like true crime series An Irishman Behind Bars,
Men Behaving Better,and with his new Returning Home series set to launch soon, Jarlath has set up an important corner of the world wide web for himself and his loyal fans.

“It’s the serendipity of the first episode that is the story of the show,” Regan explains when asked about the success of his podcast. The random tweet from Regan that was shared with Linehan’s followers, resulted in his first podcast interview. The conversation that resulted from it established the tone of An Irishman Abroad. In conversation, Linehan revealed to a new-to-London Regan an untold truth about being an Irish expat overseas. “Graham told me that no one is looking into your garden when you move abroad,” he explained, referring to the small-town Irish habit of taking an interest in neighbourhood activities.

"No-one knows you and there is a beauty in that anonymity."

This truth became a key feature of the podcast, the goal being to discover real moments of insight i in the interviews each week.


The longform interview style also appeals to listeners craving in-depth stories in an era of information overload and short attention spans, ”We are in the age of wanting the fastest answer, the quickest explanation for the most complex of theories,” he explains. This mindset of wanting to skip to the final page of a book, fast-forward to the good bits and skip the ads means Regan is dedicated to an interview style that slowly pulls on a thread to unravel someone’s story about being an Irish person overseas.


It is not just the Irish angle or having high-profile guests like Hozier, Sharon Horgan and Linehan that bring back his ever-increasing listenership every week. It is the ability he has to make each interview, “almost like a therapy session; that’s what they [listeners] say anyways. I always think, what do the listeners want to know and can I ask the guest something they haven’t been asked before.”


Regan’s dream guests include Daniel Day Lewis, Roy Keane and one surprising choice: Irish icon Louis Walsh who managed Boyzone, Westlife and was a judge on The X -factor. “I want to know what the connection is for this musical maestro between his head, heart and ultimately his wallet, that makes him think - this is a hit, they’re going to be huge.”


His strategy to discuss topics his listeners want to hear led to the creation of his “Returning Home” episodes. In this series, he uncovers the obstacles faced by Irish expats looking to come home to Ireland after years spent abroad and for Regan, the cost to return home for some Irish expats abroad is surprising.

"The thing that I am learning across the series is the insane cost of moving back, costs that I couldn’t believe. When I heard the figures of trying to get your family from Australia back to Ireland and the thousands it was running into […]now that shouldn’t be the case.."

Anyone watching Regan will certainly see how his move to London six years ago led to great personal and professional success. One positive was the cheaper cost of living there that allowed him to be more financially prepared for the future - not knowing that future would include the UK divorcing itself from the EU. Regarding Brexit, Regan admits it is a worry for his peers at home and abroad. The uncertainty of Brexit means consumers are more careful on what they choose to spend their money on, specifically comedy. “Comedy is a luxury, it is not the top of the shopping list. My colleagues [in the comedy scene] are concerned,” he said.

These concerns won’t stop Regan’s plan to come home–eventually. “It has always been part of the plans. I want to send my son to an Irish secondary school and I practically know the day that I will be home by to make that happen,” he says.

The next big milestone for Regan is his 300th live episode taking place on June 15th. All profits from the night at the Underbelly Festival Southbank will go to support the London Irish Centre Charity and its work with the Irish in London.

There will be appearances from Irish household names, musical guests and a healthy dose of laughs, too. Regan coyly refuses to reveal names but promised the appearance of some past popular guests and some “pretty cool” new ones.

“Basically, there is going to be chat, music, comedy and craic. Everyone is going to have a blast for a great cause.”

A night of honesty, humour and music sharing Irish stories from home and away - guaranteed to be another successful Regan production.

The 300th live episode of the An Irishman Abroad is on June 15th at 7:45pm at the Underbelly Festival Southbank, Belvedere Road Coach Park, London, SE1 8XX.