The Usual Suspects being investigated for foreign currency overcharging 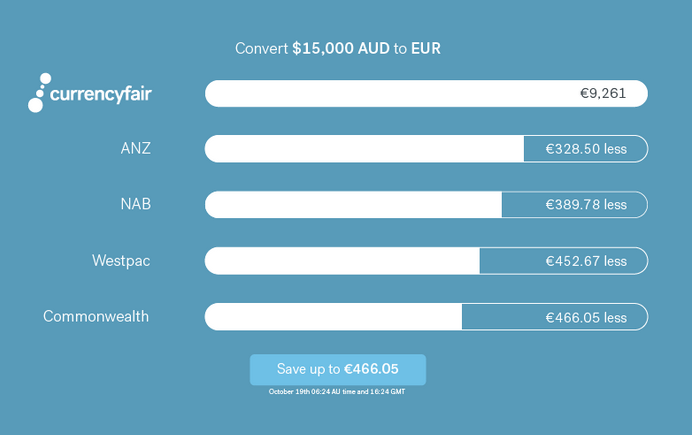 In the final moments of the cult classic movie The Usual Suspects, Agent Kujan has the sudden dawning realisation that Kevin Spacey’s character Verbal Kint has deceived him, and is in fact the mysterious crime lord, Keyser Söze. It’s a plot twist for the ages, that shocks the viewer as the deception unravels.

In recent months, the Australian public has been going through a similar rude awakening as many of the fee charging practices by the big banks are laid bare by the Australian Competition and Consumer Commission (ACCC). In early October 2018, the consumer watchdog announced that it would put Australian suppliers of foreign currency services under the microscope.

Australian consumers – and businesses – have been kept in the dark about the exact cost of sending money overseas for far too long. The current public outrage in Australia at how banks have been taking advantage of their customers’ implicit trust in them for decades is understandable.

At CurrencyFair we believe these developments are long overdue. We have been outspoken on this for many years. This is why we started our company nine years ago - to revolutionise online international (FX) money transfers through low cost, fast, transparent services. We believe in a world of fair financial services. And we walk the talk . Visit our site and you’ll see that what you see is what you pay. And why shouldn't everyone have access to the same fees and rates as large businesses can negotiate?

What has prompted this long overdue investigation? According to Rod Sims, chairman of the ACCC, the consumer watchdog:

“The exchange rate you google is not the exchange rate you get from the big four banks. The difference is known as the ‘mark-up’, and it’s often a big part of the price consumers pay when converting currency. Many consumers have complained to the ACCC about these high mark-ups, as well as the transaction fees that often apply on top of that.”

We have been campaigning for change and fully support Rod Sims’ comments.

This excessive pricing has made Australia the third most expensive G20 country for consumers and small businesses to send money from. This raises the cost of doing business in Australia for new companies and startups, working with smaller budgets yet eager to make their mark in the world.

We see this every day. On October 19th 2018, we conducted a comparison. We compared the cost of exchanging A$15,000 Australian Dollars to Euro and compared CurrencyFair, CommonWealth, ANZ, Westpac and NAB. With the “Big Four”, you were losing anywhere between over €328 and over €466:

This difference in exchange rates and the savings customers miss out on are the reasons why CurrencyFair was created - to introduce a world of fairer financial services to all.

Our founders thought of a transparent way to send money overseas that saved both businesses and customers time and money. Our peer-to-peer model – or person to person – cuts out intermediaries such as banks and brokers (and their hefty fees and commissions) from the process. A simple idea, that keeps things fair.

CurrencyFair is fully regulated by the Central Bank of Ireland for Europe, The Monetary Authority of Singapore, the Hong Kong Monetary Authority, and the Australian Securities and Investments Commission (ASIC), and have always operated on the basis of transparency to make sure our customers worldwide are saving money. And to date, our customers have saved over A$300 million!!!

In contrast, the inquiry in Australia is investigating consumer complaints around:

"Too often, the answer seems to be greed — the pursuit of short-term profit at the expense of basic standards of honesty," according to Commissioner Kenneth Hayne.

While Australian banks are battling the results of the inquiry, hastily trying to repair their lost reputation and rebalance the way they exchange currencies, at CurrencyFair we are focused on the future - adding more currencies and products for our business and consumer customers that gives them an even better experience than ever. Because the fair part - that’s who we are.

As the famous line goes, “the greatest trick the devil ever pulled was convincing the world he didn’t exist”. Well the Australian consumer watchdog has finally called out this trick, calling time on the murky FX practices of the usual suspects, and this time there’ll be no Kobayashi waiting patiently in a getaway car.

Don’t be fooled like Agent Kujan - visit currencyfair.com today and try our free currency calculator to see the savings you can make when exchanging AUD compared to the big banks.

Top 5 Countries for expats to move to