CurrencyFair Blog The US Midterms & the Dollar: All you need to know
Money Matters Global USD Singapore Currency News

On this side of the Atlantic, we have a lot of distractions to keep us busy - Brexit, elections across Europe, and of course the return of the X Factor ?.

However there is an interesting and equally important battle for power taking place in the US - the 2018 midterm elections.

The Midterms are a battle for control of the United States Congress. This November they give the Democratic Party the opportunity to win back control of both the Senate and the House of Representatives. They are seen as crucial for Democrat hopes of frustrating President Trump and the Republican Party’s policy agenda for the remainder of his term in office.

It’s Halloween, I have a costume to plan - why does this matter to me?

The reason you should be keeping an eye on what is happening out West is to see the impact it will have on the US Dollar and the currency markets.

As seen with President Trump’s administrative shake-ups or Brexit, events like these matter when it comes to the currency markets (here is our most recent September summary of such events). World events are intrinsically linked to market movements.

Whether you are staying up late to catch Last Week Tonight, or associate “midterms” with cramming for exams  - fear not, we break down what you need to know about the elections, and most importantly how the US Midterms could impact the US Dollar and markets.

What are the US midterms exactly?

The 2018 United States elections will be held on Tuesday, November 6, 2018 in the middle of Republican President Donald Trump's term.

The two main political parties in the US are fighting for control of Congress. These two parties are the Democrats (associated with the colour blue) and the Republicans (associated with the colour red). There is a rumour that there could be a new “third party’ emerging for the 2020 Presidential Election (no, not Kanye) but if history has taught us anything it is that new parties do not fare well in the US political arena.

The House of Representatives is the lower of Congress's two chambers (the upper chamber is the U.S. Senate). A bill needs to pass through both houses in the same form before becoming law. However the individual houses possess differing powers to allow for proper checks and balances on one another.

The Senate has the power to:

The House of Representatives has the:

All 435 seats in the House of Representatives and 35 of the 100 seats in the U.S Senate (two seats per state) will be up for grabs this November

How long can someone hold a seat in the Senate?

A quirk of the Senate is a term there lasts six years (as opposed to two years for the House), and therefore only about one third of the seats are up for a vote every two years.

Why are there more vacant seats to fill in the House than in the Senate in these Midterms?

Let’s look at the Senate. Seats held here by Democrats total 49 (47 Democrats, and two Democrat-leaning Independents) and 51 Senate seats are held by Republicans.

This November, Democrats are defending more seats in the Senate than Republicans: 25 as opposed to Republicans defending just eight. The current Democrat seat holders or “incumbent senators” want to stay on and are going for re-election gives Democrats a strong start.

However to gain control of the Senate, Democrats need to gain just two more Senate seats from Republicans, to add to their existing 49, to give them a majority of 51 or more. The race to gain the two seats is mainly focused on Nevada and Arizona, where there is an “open race” - the current senator in that seat is not going for re-election.

However it is an even more interesting political drama to watch in the House of Representatives.

The current state of play in the House of Representatives.

There will be 435 seats in the House of Representatives to fight for. Right now 193 of them are Democrat held and 235 of them are in Republican hands. 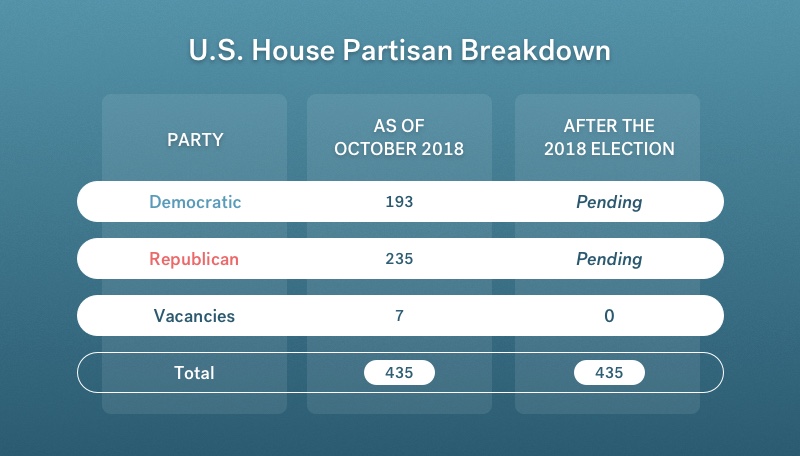 Why Republican retirements could lead to a “Blue Tsunami” in the House?

Fortunately for the Democrats, 25 “pure retirement” seats will be left vacant this November by Republican representatives who have chosen not to run again, compared to just ten Democrats retiring. This is not including the seats being vacated by Republicans leaving the party completely or due to allegations of misconduct (sometimes midway through their campaign trail), leading to a total of 37 Republicans and 18 Democrats as of October 2018 not seeking re-election.

This means the GOP “Grand Old Party” could be over for the Republicans.

|  It’s been widely speculated that unhappy Republican voters could flip their cards and vote for Democrat candidates, causing seats that are presumed to be red to land on blue in both the House and the Senate - leading to  a so called “Blue Tsunami”.

What issues are people concerned with in the Midterms?

Health care, the economy and immigration are the topics that US voters most want candidates to discuss or address.

What are the issues the Democrats are concerned with in the US Midterms?

Primarily health care. Even though Republicans would like to repeal the Affordable Care Act (ACA) introduced by President Obama, Democrats are retaliating by fighting over one important provision – for the protection for people with pre-existing medical conditions.

What are the issues Republicans are pushing in the US Midterms?

For Republicans, the conversation seems to be about “Making America great again” so their focus is on:

Both are key points for President Trump.

As we know, political volatility can disrupt the currency markets so there could be turmoil in store for the USD based on the election results.

What could happen to the USD if Republicans increase their seats in the House and Senate?

Probability = 2% according to a UBS report

A “red wave” would lead to Republicans having stronger majorities in the House and Senate, making it easier to pass legislation that was previously blocked like:

What could happen to the USD if Republicans keep the same amount of seats in the House and Senate?

Probability = 18% according to a UBS report

This “status quo” means Republicans can still proceed as planned with most likely:

What could happen to the USD if Democrats win the House, but Republicans retain control of the Senate?

Probability = 60% according to a UBS report

"Around 58 percent of voters also want Congress to be more of a check on the president and not lead to an impeachment, according to a September Quinnipiac University poll."

What could happen to the USD if Democrats win the majority of seats in both the House and Senate?

Probability = 20% according to a UBS report

This so-called “Blue Tsunami” could mean:

The USD is not immune from serious political misconduct. If the Democrats trigger an investigation,it would most likely have a negative impact on USD.

"A September 2018 survey showed that 56% of voters do not want an impeachment of the President to result from the Midterms if Democrats win."

What factors could predict who will win the US Midterms?

According to Nate Silver of fivethirtyeight.com, along with some October surprises still to come,

Two factors being used to assess the likelihood of a Democratic victory:

The correlation between a president’s approval rating and the number of seats they can lose in the midterms. And right now, President Trump does not have the healthiest of approval ratings:

The second factor in the outcome of the midterms is the rate and number of Republicans that are leaving the party - currently at its highest since the 1970s.

Combined, these paint a troubled picture for a “red” win on November 6th.

We’ll be keeping a close eye on the impact of the midterm elections on the US dollar as November 6th draws near. Certainly if Democrats capture either the Senate, the House or both, investor confidence might take a hit as blocks and legislative standoffs are inevitable.

If Republicans take the upperhand and maintain their majorities, we can predict them to proceed with their tax reform, trade tariffs and infrastructure spending.

Either result will lead to interesting events in both the House and Senate in the weeks following November 6th, and as ever, we will continue to report on these developments and how they impact the USD and the currency markets in general.

CurrencyFair.com is not rendering investment, legal, or tax advice. While the information contained herein was obtained from sources believed to be reliable, author does not guarantee its accuracy or completeness, nordoes author assume any liability for any direct, indirect or consequential loss that may result from the reliance by any person upon any such information or opinions.